The fishing fleets of the 1920's - Hulls Gamecock fleet

Today, the great fishing fleets have disappeared. A modern trawler can catch as much as whole fleets did in the past. The Gamecock fleet, which sailed out of Hull, comprised of 49 steam trawlers, 6 carriers and 1 hospital ship. They sailed together and operating orders were signalled by the Admiral in his 'Flagship'.

The fish were gutted on board. Trawlers would be followed by hundreds of seagulls eager to pick up the guts. The fish were then packed and sent over in rowing boats to the carriers. The rowing boats then picked up new boxes from different carriers. It was very dangerous and many seamen got injured or killed.

There was a lot of shouting and scrambling as the boxes were passed onto the carriers at just the right moment. In a heavy sea these little rowing boats could easily be swamped. The hospital ships were needed. Often the fleet would trawl through the night in a gale.

Why exactly did the trawlers fish together in fleets? The herrings swim in huge shaols migrating from the North of Scotland in the spring down to Lowestoft in winter. These shaols were miles long. The fishing boats stayed at the fishing grounds for days at a time and passed their catch onto the carriers. They literally went round and round in circles unloading their catch every time they passed the carrier.

The carriers were very fast boats capable of getting the catch to markets. Many new fishing grounds were discovered in the 19th Century and they were quite distant from the London markets. Fleeting began in the 1840's. The carriers were fast sailing ships. These sailing ships were replaced by steam carriers as steam ships became more common. Fleeting continued right into the 1930's.

The steam carriers were built especially for the purpose. They were very fast and could face the wildest weather. The bows stood very high out of the water but the sides of the vessels slope down, so that in the stern it would be almost possible to step on board of a small boat. When the carrier reached the fleet she would drop anchor. Signals were sent for loading to begin. 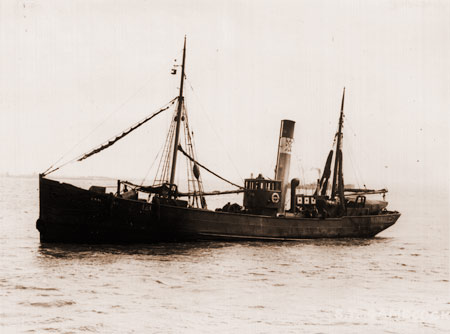 Picture above : The Gamecock - The Gamecock fleet flagship which ultimately became a Scarborough ship after fleeting ceased. Needless to say her name was Gamecock SH191 and she was sunk on the night of September 25th 1916 by German submarine U57 under command of Kaptain Ritter von Georg.